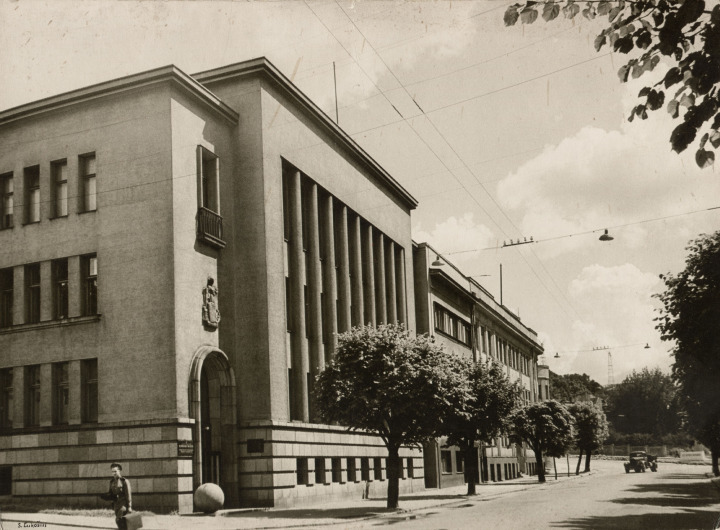 The origins of Kaunas County Public Library (KCPL) date back to 1st of October in 1950. At the very beginning the Library was established in a building designed by the Lithuanian architect Vytautas Landsbergis-Žemkalnis (K. Donelaičio St. 8). During the years, the Library was expanding and on 7th of September in 1987 new premises were opened in the Small Oak Grove (Radastų St. 2). Currently the readers are served in both departments.

When the Library started working, the main fund included 23 thousands publications that were provided by the National Republican Library of Lithuania and by the Library Collectors. Back then, the Library membership was available, the main book fund (the book depository) was organized and the service for the visitors in the reading rooms was provided. Since 1973 the Library organized an events known as ‘‘Musical Wednesdays’’. These events made the Library famous in the cultural life of Kaunas.

A new stage for the Library started with the Independence of Lithuania. In 1993 an exceptional task was given to the Library. It was to preserve the second copy of National Press and to prepare the national retrospective bibliography. Moreover, European Information Centre of Kaunas Vicinity, Johannes Bobrowski German Reading Room and Swiss Reading Room were established, also KCPL became a part of the World Bank Depository Library.

For the past decade KCPL has been particularly active in presenting information about Kaunas history and cultural heritage: the Library organizes various events, exhibitions, arranges representational publications and electronic catalogues. In 2006 the exploration of the preserved publications and manuscripts kept at KCPL were intensified. After the Library joined the project “Development of Virtual Electronic Heritage System” the documents were digitized and presented in the virtual space.